At 6 AM on a chilly November Saturday, Professor Eric Holdener’s Paleobiology class gathers in Peirce Dining Hall to grab a quick breakfast before hitting the road for our fossil collecting field trip. The entire class fits comfortably in one Kenyon van: me in the front, Sean Deryck ’18 and Jessie Griffith ’19 in the middle and Sarah Dendy ’19 and Nontokozo Mdluli 18′ in the back. Once we get about 5 miles out of campus, everyone in the back is dozing, and Professor Holdener and I listen to NPR and discuss the geology of the landscapes we pass. We stop once along the way to pick up some fossil fuel for the van, laughing as we acknowledge the irony.

It’s safe to say that Professor Holdener’s Biology 253: Paleobiology, fills a specific niche in the biology department. For some of us proud paleobiology students, we’ve been searching for trilobites and Australopithecine remains in our backyards for years, and for others it’s a convenient way to fill their environmental distribution requirement within the molecular biology major. But the field of paleobiology is truly a mosaic of the natural sciences, combining chemistry and geology with physiology, ecology, and evolution; there’s something for everyone’s curiosity. The course is advertised as a lecture, but Professor Holdener wants us to apply our knowledge to concrete examples and a lot of our class time is spent in the geology lab, analyzing and identifying specimens from his extensive personal collections. We are interested not only in what organisms are in the rock but how they were preserved and how they lived, using the scant fossil evidence and paleobiology publications as our guides, particularly the official Ohio fossils manual.

Professor Holdener searches for fossils at Oakes Quarry, once a Silurian reef bed.

A course focused on marine paleobiology may seem out of place at a college in the middle of land-locked Ohio, until you consider that the entirety of what is now the Midwest was once covered by shallow seas, all the way to the foot of the Appalachian Mountains. Much of the rock basin from Kenyon to Cincinnati is siliciclastic limestone, the remainders of giant reef formations brimming with extinct marine life. Our first stop on today’s tour is Oakes Quarry, a fossiliferous limestone quarry now converted into a public park. We track across the mudstone flats to the far side of the park where exposed rock faces date back to the Silurian, around 440 million years ago. Though now it looks like a jagged dolomite rock face, Professor Holdener tells us to imagine when this was a gigantic sprawling reef. It’s difficult to fathom such an alien world, until we glance down and spy the abundance of marine life poking out of the rocks at our feet.

‘The first person to find a rock that’s 80 percent crinoid wins!’ Professor Holdener calls as we climb up and around the weathering piles designated for fossil collecting and set to work. I gasp as I turn over rock after rock of what looks like nuts and bolts cemented with quartz, but are really the fragments of crinoid stems, an ancient phylum of echinoderms. In the cold morning air our fingers go numb from sifting through the weathered fragments of the rock face, many still coated in frost. 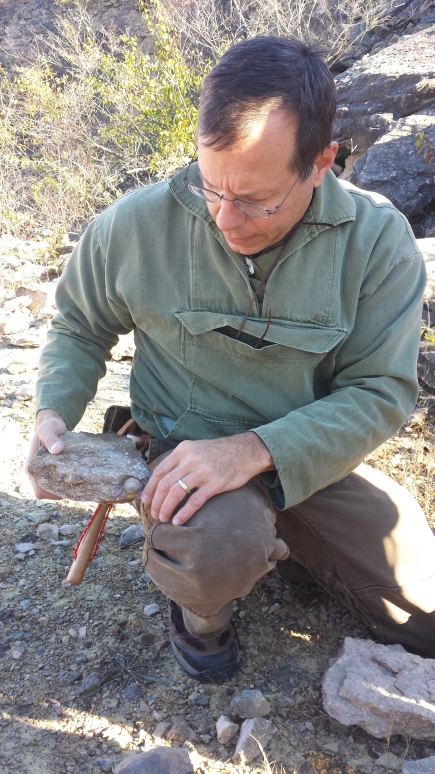 Professor Holdener shows us an exciting find: the mold of a gastropod sticking out of a crevice in the rock.

After an hour of hunting, Professor Holdener calls us over and we proudly survey our finds, pockets stuffed with crinoid fragments and brachiopods and arms filled with rock clasts bearing gastropod and cephalopod molds. One intriguing specimen several of us turned over are stromatolites, the fossil evidence of ancient algae called stromatoporoids, which are some of the earliest known organisms on the planet. When the algal mat is covered over in sediment another layer of cells forms on top, creating a stacked crystalline structure out of the sediment that sticks to the colony’s biogenic residue. Professor Holdener warns us not to take too many specimens; in the heat of an exciting hunt it’s easy to catch fossil fever, and we all clearly feel it judging by our failure to notice the beginnings of frostbite from clutching icy rocks in our bare hands. He passes out paper bags for carrying our fossils and we write our names in Sharpie so we can keep track of who collected what. As we head back to the van, Professor Holdener is elated, saying this is the best day of collecting he’s had at this site, and he’s visited five times already.

Back in the van, we warm our fingers and drive a little farther east, and 50 million years farther back in time to the Ordovician, accessible to us through the rock faces of Caesar Creek Spillway. We pick up our fossil-collecting permits from the visitors center of the state park and navigate our way back to the spillway, where the Ordovician reef rock was exposed by the Army Corps of Engineers during flood control projects on the Little Miami River watershed.

The view at Caesar Creek Spillway.

Once at the site we scrabble eagerly up the side of the spillway, though technically fossil collectors are supposed to stay on flat ground. Professor Holdener warns us to watch where we step; one loose rock could mean a tumble down the rock face, potentially onto another classmate searching below. We shout excitedly with every new find as we move across the low cliffs, collecting whole horn coral polyps as large as our thumbs, perfectly preserved closed brachiopod and bivalve shells, and an abundance of the incredibly diverse group the bryozoans, sometimes finding multiple species side by side on a single surface. Sarah Dendy finds a trilobite cephalon and I spy a slightly crushed but complete enrolled body, fulfilling our personal missions for the trip. Much of what we find here is in big slabs of rock jutting out of the face, much too large to carry away with us though a couple of times we try. In these instances, pictures will be our reference for identification.

Brushing the frost off a rock slab reveals a beautifully preserved section of Ordovician tabulate coral.

A trace fossil, the evidence of what may be a belemnite cephalopod resting on the seafloor at Caesar Creek Spillway.

Time flies when you’re digging through history. Before we know it, our hour and a half is up and we reluctantly carry our stuffed paper bags back to the van. We stop for a late lunch at a diner and Professor Holdener tells us how he rediscovered his lifelong passion for paleobiology in graduate school after he had majored in philosophy as an undergrad. Back on the road and back toward the 21st century, we use one of our laptops to play music, belting Kenny Loggins and Jackson 5 as we follow the rolling hills back to Gambier.

We step out of the van at 4 PM, back to our busy lives and our piles of weekend schoolwork. Professor Holdener offers to clean our specimens for us in preparation for class, where we’ll try and identify what fossil relics our samples hold. Already, I’m looking forward to deciphering the mysteries of the past embedded in my collections, using the detective work of paleobiology to travel back in time with every new discovery.